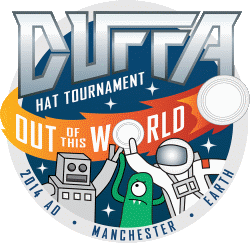 DUFFA Hat 2014 is our seventh event and if we do say so ourselves, we put on one heck of a show! The reason DUFFA Hat is the best Hat Tournament in the world is simple. We’re a non-profit event run entirely by volunteers. We do it because we love it!

As always, the tournament is open to players of all skill levels. Complete beginners and international superstars will play together on the same teams. Winning isn’t important. Having a darn good time definitely is!

We promise you DUFFA Hat 2014 will be another amazing event. Here’s what you’ll get for your 35GBP tournament fee…

All registrations received during this time will be entered into a ballot for a space at DUFFA Hat 2014. After selling out in under 4-minutes last year, we hope you understand that the fastest-finger-first method just isn’t the right way to go this year. Any registrations received on or after 00:00 on Saturday 19th April will be placed on the waiting list along with those unsuccessful in the ballot.

We hope to be able to confirm if you have a place before Sunday 4th May - please check the Registration FAQs below for more information.

Hope to see you there!

Need more details of what a hat tournament is?

We've had to change the registration process for 2014.

DUFFA Hat 2013 sold out in 3 minutes - in order to ensure the tournament registration is as fair as we can make it we're changing the process to a weighted lottery. We'll allocate spaces based on a number of scoring factors to ensure DUFFA Hat is as good as we can make it.

We understand that lots of players like to come with their friends - please register together - if one person in a group gets a space from the lottery we'll invite the others in the group. This actually may increase your chances of being successful.

DUFFA Hat 2014 will be our SEVENTH year and each year has only be made possible thanks to our sponsors. The premium sponsor in 2010 received an advert on over 300 Ultimate Players shirts, other sponsors received a link on the website, advertisement in the DUFFA Hat Programme, and feature on the sponsors board used during prize giving and the Saturday night party. If you're interested in sponsoring for 2014 take a look at our 2012 sponsor pack to see what we offer, email any enquiries to info@duffa.org or call Richard on 07800 646396.