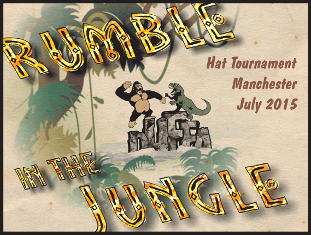 The theme for our 8th Hat tournament was 'Rumble in the Jungle'...think vine leaves, abandoned temples, cannibals, and a cornucopia of weird and wild animals! If you could find it in a jungle at any time in history, it was there at the hat tournament.

Our tournament has a reputation for being very fun, very spirited, and very well organised. Included in your fee was:

Two days of awesome ultimate – at least six matches
DUFFA Hat is a completely volunteer run not-for-profit event! As always, the tournament is open to players of all skill levels, and is a great introduction to the sport for beginners. We will also offer GUARANTEED selection for the tournament if you are a happy friendly player traveling from outside the UK to play with us!

Please check the Registration FAQs below for more information.

DUFFA Hat 2013 sold out in 4 minutes - in order to ensure the tournament registration is as fair as we can make it we had to change the registration process for 2014 to a weighted lottery - this process worked extremely well last year, and we will be using the same process again this year.

Registration for the tournament will open on 13th April and close on 19th April.

DUFFA Hat 2016 will be our NINETH year and each year has only be made possible thanks to our sponsors. The premium sponsor in 2010 received an advert on over 300 Ultimate Players shirts, other sponsors received a link on the website, advertisement in the DUFFA Hat Programme, and feature on the sponsors board used during prize giving and the Saturday night party. If you're interested in sponsoring for 2016 take a look at our sponsor pack to see what we offer, email any enquiries to hat@duffa.org or call Simon on 07809 489010.