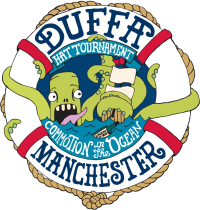 Theme: Commotion in the Ocean!

Every year we host one of the largest "Hat Tournaments" in Europe. It's an Ultimate Frisbee tournament where people sign up as individuals and are put onto balanced teams (not really picked from a "hat" but that's the idea..) and given their own coloured tournament shirt. It creates a fun and friendly tournament experience with players attending from all over Europe! The weekend includes camping close the pitches and a huge party on the Saturday night. We like to think it's become one the highlights on the Ultimate calendar for pros and beginners alike!

BREAKING NEWS: DUFFA Hat 2013 was a success! Thanks to all the attended, played with spirit and / or volunteered!

Registration was a record breaking sell out!!!. We sold out in **4** minutes of opening UK registration. Sorry to those that were left disappointed - we have been blown away by the demand!

DUFFA Hat 2013 will be our sixth year and each year has only be made possible thanks to our sponsors. The premium sponsor in 2010 received an advert on over 300 Ultimate Players shirts, other sponsors received a link on the website, advertisement in the DUFFA Hat Programme, and feature on the sponsors board used during prize giving and the Saturday night party. If you're interested in sponsoring for 2013 take a look at our 2012 sponsor pack, email any enquiries to info@duffa.org or call Steve on 07968 694745.